RUN-AWAY
From the Subscriber's Place, near CHARLES-TOWN, On Wednesday, the 21st Day of September Inst. Two NEGRO FELLOWS,
NAMED Prince and Jacob:—Prince is a stout, well-made Fellow, about 5 Feet 11 Inches high, of a black Complexion, and rather of a thin long Visage, is a little pitted with the Small-Pox, and about 30 Years of Age ;—had on when he went away, an Osnabrugs shirt and Trowsers, and commonly wore a thick Cap ; He was born in New-Jersey or Pennsylvania, and was brought up to the Tanning-Business, at Mr. Potts's, in Trent Town in New-Jersey, who afterwards sold him to Mr. Joseph Taylor, of the same Province, from whom Mr. Radcliffe, jun. bought him, 26th November, 1771, at William Cooper's Ferry, and was brought Passenger by Captain Blewer, from Philadelphia to this Place, shortly after that Date; since he has been here, he has sometimes worked at the Business he was brought up to, and at other Times, has gone in a Scooner: He speaks very good English, and has at several Times, when out on the same errand he is now on, endeavoured to pass for a free Fellow, and changes his Name to Tom, Peter, &c. instead of his own ;—it is imagined he will do the same now, and will try to get back by Land or by Water, but most pro-bably by the first, to the Place where he was brought up at, or to some Place to the Northward of this.
JACOB is a thick, well-made Fellow, about 5 Feet Inches high, and is remarkably well-legged of blackish Complexion, full-faced, with a chubbed thick Nose, and thick pouting Lips, and bushy Head of Hair, which grows pretty low over his Forehead, and he appears to be about 35 Years of Age: he was born and brought up in North-Carolina to the Farming-Business, and to driving a Waggon, &c. &c. was brought up by one Mr. Thomas Hovendon, of that Province, and sold the 29th of May, 1771: He speaks very good English, and it is supposed he will also endeavour to pass for a free Negro, and go with the above-mentioned Fellow, or to the Place in North-Carolina where he was brought up.—Whoever will apprehend and deliver either of the above-mentioned Fellows to the Subscriber, or to the Warden of the Work- House, shall receive TEN POUNDS Currency for each, and all reasonable charges; and, it any Person will inform of either of them being harboured by a Negro, shall recieve a Reward of TWENTY POUNDS, or if by a white Person FIFTY POUNDS Currency, on Conviction of the Offender or Offenders.—All Masters of Vessels and others, are hereby forwarned from employing them, or carrying the said Negro Fellows off, or out of this Province, as they will, on Conviction of the Same, be prosecuted to the utmost Rigour of the Law, by
THOMAS RADCLIFFE .


RUN AWAY from Subscriber Near the NEW GATE, on THURSDAY Night the 16th of SEPTEMBER last . A stout NEGRO MAN, named PRINCE,
About Five Feet Ten Inches high, of a black Complexion, and a little pitted with the Small Pox, is about Twenty-eight or Thirty Years of Age, had on when he went away, a Sail-Cloth Frock and Trowsers, and a blue Negro-Cloth Jac-ket ; he was born in New-Jersey or Pennsylvania, and was brought Passenger by Capt. BLEWER to this Place last January ; he speaks very good English , and sometimes endeavours to pass for a free Fellow; he was brought up to the Tanners Business, but of late has gone in a Boat. Whoever will deliver the said Fellow to the Subscriber, or to the Warden of the Work House, shall receive FIVE POUNDS Reward; and if any Person will inform of his being harboured by a Negro, shall receive a Reward of TWENTY POUNDS, by a white Person, TEN POUNDS, on Conviction of the Offender or Offenders, All Masters of Vessels and others, are forwarned from employing or carrying the said Negro Fellow off the Province, as they will, on Conviction of the same, be prosecuted to the utmost Rigour of the Law.
THOMAS RADCLIFFE 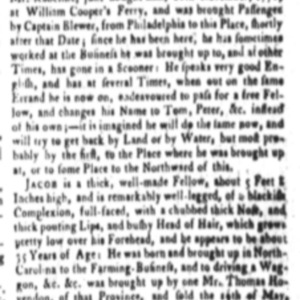