THE following NEGROES have absented themselves from the subscriber's plantation on the Conagree since the 15th of June last, viz. Cuffee, a fellow about 30 years old, well made; George, a young fellow about 20 years old, well made; Sam, an old fellow, father to George; Peter, a stout young fellow; Ned, a boy about 12 years old. These 5 negroes were bought of James Brisbane, Esq; and came from his plantation near Savannah River, where tis probable some of them are gone. Ben, a stout made fellow, a sawyer, about 30 years old, formerly belonged to Alexander Wylly, Esq; and wokred a long time within 7 miles of Savannah on said Wylly's plantation on the river; Jemmy a stout well made fellow, a carpenter, about 35 years old, formerly belonged to Thomas Lambull, Esp; Juliet, his wife, a small yellow wench, whom he took along with him, she speaks bad English; Moses, a very tall fellow, upwards of six feet high, very black, he lately lived with Mr. Samuel Douglass in Georgia; Jolberg, a carpenter; China, an ordinary fellow, about 30 years old, much ruptured, used to live at Mr. Douglass's in Georgia; Achilles, a stout fellow, about forty years old, formerly the property of Alexander Wylly, Esq; a very good sawyer. Sampson, a stout young fellow, a plowman and waggoner about 20 years old; he lived last upon Peedee river with Mr. Thomas Lord; Renety, a boy about 15 years old used to take care of my horses in town; Serra, a boy about 12 years old, remarkable for a long visage; Titus, a boy about the same age, lately lived with Mr. John Lord at his plantation in Amelia Township. As several of the above negroes have been enticed away from their real owner by sundry white people, under a pretence of being made free, as they must before this time have found themselves imposed upon, I promise, that if any of them return home of their own accord, they shall be forgiven; and those who are near town, may call on Mr. William Greenwood in Charlestown, for a pass to my plantation. Any person who will give such information of the above negroes, so as they may be had again, shall receive TWO GUINEAS reward for each negro.
ANDREW LORD 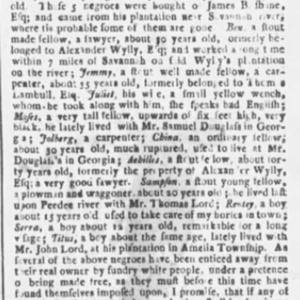 Warning: Attempt to read property "anonymous" on null in /home/blackcra/archive.blackcraftspeople.org/themes/cville_rally_theme-master/functions.php on line 86